This is a three person (or more) short freeform LARP.  You will develop three personas: Interviewer, Face and Heel then cut promos on each other.  Each player will get a chance to play each of their personas.  Mix and match who is who to get different experiences.

In order to download this game you must purchase it at or above the minimum price of $2 USD. You will get access to the following files:

Support this game at or above a special price point to receive something exclusive.

Each purchase of #CutAPromo will add a community copy for another member of the community.

Cut A Promo is a game about, well, cutting a promo.

If you're new to the term, a promo is any interview, promotional video, or skit used to hype up the characters and build drama before a stage wrestling match.

The PDF is 4 pages, with plain text but a perfectly readable layout. It's also written partly in character, which is a nice touch, and it gives some excellent examples of famous promos via youtube links at the beginning.

To set up, you need to create at least two wrestling personas and one interviewer. This is the crux of the game, and a *lot* of advice and examples are provided to help. There's suggestions for personality, wrestling style, backstory, and the creation process should reliably produce characters that feel like they fit the scene.

The game gives a little less advice on the promo itself, although there *are* suggestions for how a wrestler or the interviewer can escalate or introduce a new topic to keep things from falling flat.

There's no winning or losing in Cut A Promo. There's just whether you make a promo you're happy with or not.

Overall, if you like acting, if you like stage wrestling, or if you just want to learn a little bit about both of those things, then you might want to check this out. 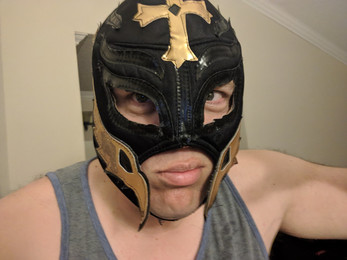